Here we go.... back into the painting and straight into an elaborate fantasy.  During my bit-of-a-break I have been reading up on steampunk ideas and imagery.  So this is a cross between Blade Runner and Frankenstein.  One of the recurring themes in steampunk is the tinker or artificer who is constantly experimenting with devices, thus the idea of the goggles that infect steampunk fashion.  Having just spent the best part of my recent free time drilling holes in doors, goggles have been a central fixture of my personal weaponry.  Thus my next painting has to have goggles in it.  Yes, I am that simple.

How to turn this into a painting?  I have to fix these things: the background and context, what is being built, composition.  I decided that the object is to be a human-like robot.  Nothing novel there.  However, the angle here is that it is a personal toy being built.  So a little towards Ex Machina if I'm not careful.  The basics is the delight in tinkering.  I fancy an artistic android rather than a mess of wires, but let's make sure it is recognisably artificial.  The background I thought about for a while, but then threw out because I decided that to go for chiaroscuro to give lots of drama.  This means the background is going to be black.  I decided to compensate by adding items such as lamps at the sides of the painting to provide some context. Acrylics on A2 paper (yes, it's an art evening again).  Killing the white (with black) first.  I put a bit of blue in as well because the foreground is going to hold various warm colours.  You really can't tell that from the photo can you?  You wouldn't have thought it would be so difficult to paint a piece of paper black.  I was really slapping the paint on.  I bet if I had done oils it would have covered no problem.  Anyway, being acrylics it dried in no time and I started sketching out the main pieces in light colours.  The first line at the bottom delineates the bench, and this was followed by a few nice lines to shape the android.  I then started on the goggle wearer staring into the heart of the machine.  The hands either side are holding implements for a bit of spot-welding thus the bright sparks in the middle that light the face up.  The face is bigger than I planned.  This might be a good thing: it makes the android more of a toy.  I might change my mind.  The instruments on the left and right are as yet rather poorly formed and will probably be changed completely - the composition still needs some work.
My plan for this evening: finish off the composition basics.  There are two weak points: the hands are too vague, but mainly the lamps and apparatus on the right hand side are not working.  Hands always need a bit more detail, but I want to get these right, particularly the size, before starting to firm up the image.  The lamps and stuff are more of an issue.  They flatten the image.  They look contrived.  So I have decided to arrange these artificer devices in a halo to provide that depth and to tie them into what is happening. 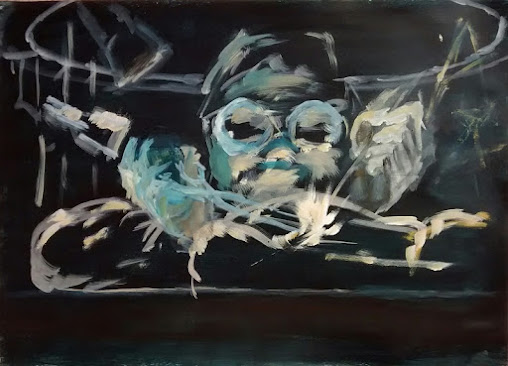 That was a bit of a waste of an evening.  I got as as far as the hands, and that was a struggle.  I have clearly taken too long a break from the painting.  I ended up redoing both hands several times, and I still haven't got the light on the right hand (the one on the left) right.  It was one of those evenings where my brush felt like an alien object.  My early attempts on the right hand were particularly dire.  However, instead of shouting loudly (done before) and repeatedly stabbing the paper with the backend of a brush (I'm still to try this out) I stepped back a bit and tried to disengage what I thought it should be, and the right hand came around eventually.  This is good enough now. 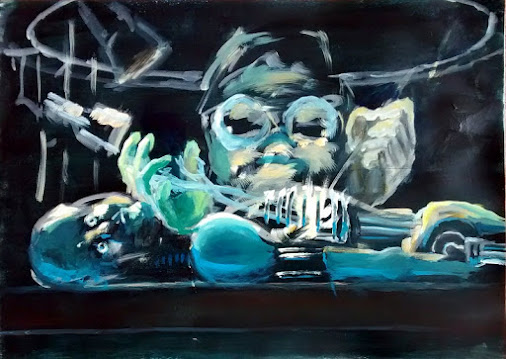 I chose to ignore the problematic contraptions hanging from the ceiling.  Instead I decided to concentrate on developing the robot.  The idea is that I'll be able to see what I want better with some more pieces in place.  That's just so long as I don't leave it so long that I'm not prepared to make big changes, and big changes are niggling away at the back of my head.
However, it was a good evening this one.  I approached it by painting the reflections in.  The face (the critical bit) was developed by adding highlights in as they worked.  I am not concerned about getting a likeness to anyone, so its just about the effect.  At the end I decided on doing two circles for the eyes, simple, but non-human.  I really don't like those paintings with eyes shining out.  Eyes are about detecting light, not generating it.  It just seems infeasible.  I think that if you are going to do fantasy, you need to choose what is to be fantastical and concentrate on grounding everything else.  Fantasy works if it both feels alien and real.  The risk of throwing in the kitchen sink is that the viewer is disassociated from the subject and the message is lost.  So black pupils that take in light.  I decided on putting ribs in.  That's possibly too human, but I think reasonable, and it is striking and easily recognised.
The machine is definitely mechanistic (one of the women in the group maliciously mistook it for a racing car).  However, my wife (best her) on seeing said it looking very spooky.  I also worked the hands a bit to put in the light and firm them up.  Those lights will have to move though.  Overall I'm quite pleased, but annoyed that I still can't work out the background context.
Right!!  I have made a decision about the background.  The current plan is just not working so I am switching back to making the room visible.  However, it will be dark so that the tone balance is not altered.  I am going for a nineteenth century factory look.  So on the left you will be able to see a large chimney breast with an open hearth which leads to a series of tall windows heading rightwards letting in a bit of night sky.  Those windows will be in strong perspective, pushing the chimney backwards.  The horizon will have to be level with the bench.  The room will just about appear out of the gloom. 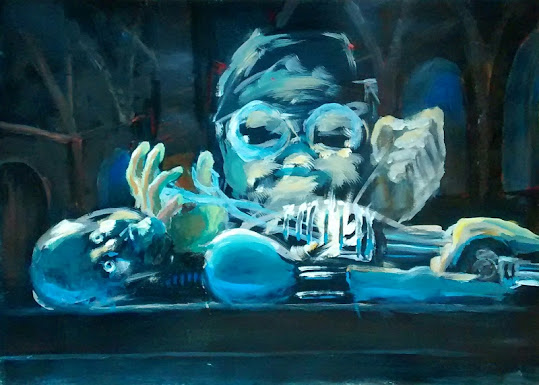 That was in the right direction.  I need to do a bit more work, in particular I want it to feel more like a cellar (windows aside) than a church.  Overall, I think the idea was the right one as it does not impinge on the main action but gives a broader context.  I also fixed the little finger on the right hand. 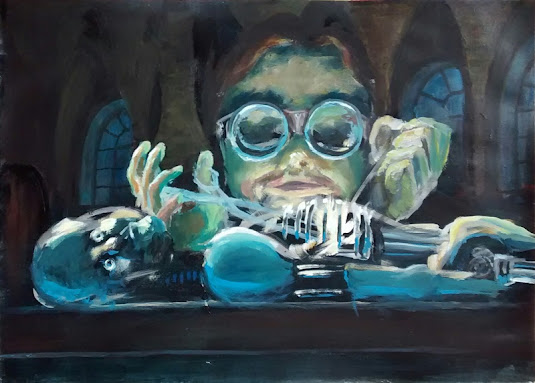 That was a good evening.  I first went back over the background with two things in mind: I wanted to change the lighting across the whole frame to add more depth; and I wanted to simplify the brickwork.  Both jobs worked.  I also raised the window on the left.  I put the windows panes in.  The background is now mostly done, but there are a few tweaks yet.
Then of course I took on the face.  Despite a bit of nervousness at the mere possibility of making a right hash of it (after the debacle with the hands, you can imagine), I plunged in making sure I didn't concentrate on details (the nose almost drew me in, but I valiantly splodged over that premature fine-brushwork).  The result had me smiling and that's a good sign.  It is coming together nicely, and maybe one more session will do it.  I like that you can't actually see the toymakers eyes, but you can see the toy's eyes.  In a way it makes the toy more human than the toymaker. 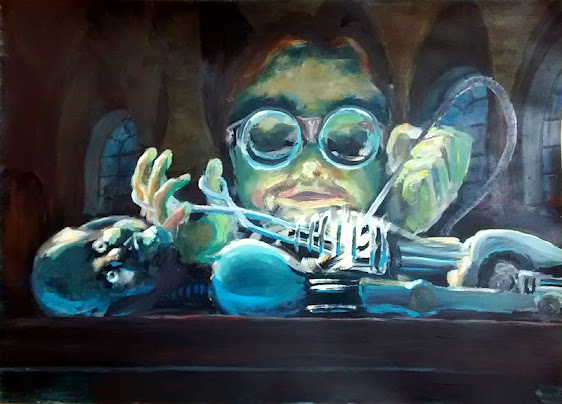 OK, I know I said I do oils at home and acrylics on club evenings.  However, as we have a demo this week, I thought justified in progressing this painting at home.  So, a few bits and pieces.  The robot's arm has been finished.  I added obvious joints to look artificial.  That's enough.  I also put detail in for the welding torch and the pincers.  However, those pincers look like they have a matt surface and I wanted them shiny.  They aren't very interesting - can do better.  More subtly, I also went back over the windows to blend the frames in better. 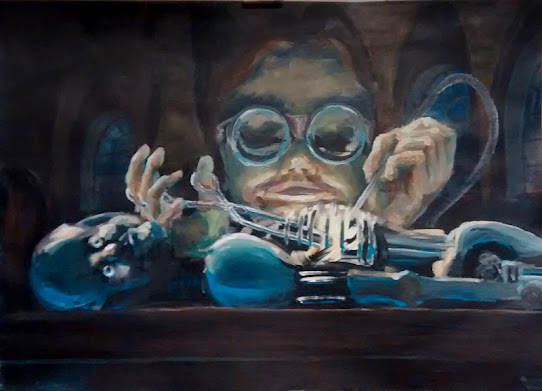 More at home, but done while watching the demo online.  That may have been a mistake.  I started out going over the pincers with a narrow brush primed with raw black, white and yellow ochre straight on the brush.  I then swept out the smeared lines to create reflections.  I know you can't see it in the photo, but trust me: it worked.  I am very pleased with those pincers now.  A pity about what came next.  I tried to finish the left hand (the one holding the welding torch).  This went very wrong.  It is terrible.  It is so terrible that I have already blacked it out so that I don't have to stare at it.  However, as I promised to show the mistakes, I have included this mistaken version.  Having thought about it, I worked out where I went wrong.  Look at the angle at the base of the finders.  The fingers are vertical and parallel.  I haven't put any perspective in at all.  They are in orthographic projection.  They are cartoons.  This resulted from my weird attempt to make the sections of the fingers the right length.  My plan to remedy this is to arrange the fingers to come out of the paper, and mostly you will only see the middle section of the fingers.  In addition, I experimented a bit with holding a pencil and decided to alter the grip.  Wish me luck. 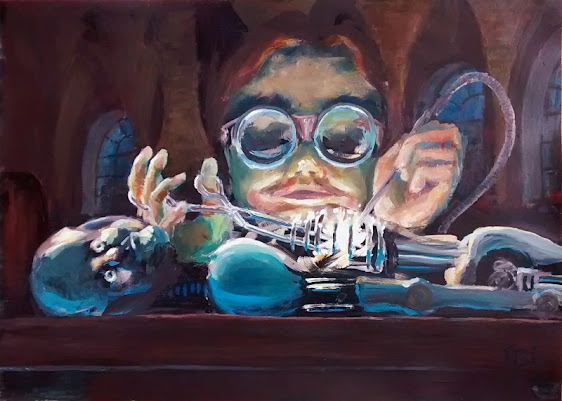 That has improved the left hand loads.  Do I do anything else to it?  It is ballpark.  I am not sure. 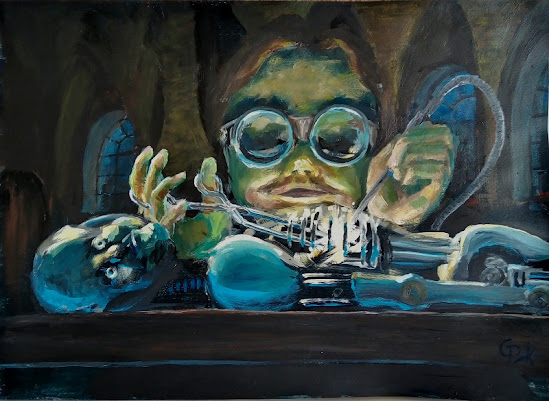 Now that is definitely all I am doing.  A bit shadowing to make the hand fit in with the rest of the painting.  Taken in isolation, it doesn't seem quite right, in the context of the whole, it what's required.  I have also slightly shortened the end of the little finger because of perspective.
Overall, it captures what I originally planned.  I am happy with the result.  Alas the lights and other paraphernalia didn't make it: they would have imbalanced the composition too much.  Maybe I'll keep them for another painting.  My wife thinks it is very creepy and has banned it from being hung in the house.  Result.