I thought I'd have a bit of a moan.

This is not really a project, so it's a bit outside of my "Mission Statement", but...
My Summer Isles painting did not make it into the SAA Paint magazine "Artist Photo - You Paint It".  On the whole, that's not really very striking, except that I've seen the other paintings that were submitted.  There were not that many, so no chance of getting lost in the crush.  Now, I accept that I am naturally biased in favour of my own paintings, but out of the six published paintings, only one came even close.  Most were frankly awful.  So why didn't mine get in?  It was clearly better than five, and I think distinctly better than their best.

This was clearly marked as a competition.  So what were the selection criteria?

My first thoughts were that the decision was very subjective.  Art is subjective isn't it?  Well certainly five of those paintings were anything but beautiful.  The original photo had a wonderful simplicity of colour and form that got trodden underfoot by ham-fisted brush daubing.  They clearly did not have sufficient control over their chosen medium for such a delicate subject.  That is not to say their blobby style won't work elsewhere, but this really did require subtly.

My next thought was that they were aiming to give a feel for the range of techniques so that some variety was shown.  For example, there was one done using wax - fair play.  Also, my painting was similar to one of those there shown.  However, that does not make this a competition.  Moreover, most of the paintings had nothing to chose between them.

Next niggling thought: they didn't want to show up the original painting by the professional artist.  That original was in pastel, which I admit is a medium I've never mastered, but can be very impressive.  In this instance it was not that impressive, but okay.  However, there is more to being a professional than getting it spot on every time, and you don't get far unless you take risks.  I can make my own dismal failures as much as anyone else.

It is clearly the case that the SAA want to present less than perfect artworks.  They advertise themselves as a society for all artists, and that includes all stages of learning.  A stated aim of the magazine is to inspire, and to inspire you need to make the goals reachable.  That means a mixture demos, and they pretty much do this.  However, that doesn't stop you celebrating the best of that inspiration when it lands on your doorstep.  So may be they intentionally want to show a variety of levels, but this is a competition.  Competitions are for the best.

Here's what I now think was going on: this was not a competition.  Whilst I wouldn't say that the paintings were picked at random, I would say that no selection criteria existed and that a couple of SAA people picked what they thought looked interesting, whatever 'interesting' meant to them.  It is the curse of modern art: as photography can take the perfect copy, the value of a painting cannot be in its perfection.  No one therefore looks for perfection, we look for added value.  The trouble is that added value is a slippery thing and cannot be pinned down.  The result is that people are prepared to pick winners based on groundless instinct, for who can contradict them?  It no longer matters if an artwork is good as long as some form of personal pain went into it.  The artwork is therefore irrelevant, only the plea that accompanies it.  This gives of us a culture of mediocrity.

This is plain unfair on those of us who are trying our best to produce something decent.  If you are going to run it as competition, then do so.  Use your judgement.  Without it, participation is meaningless.

I don't know if many of you managed to see Grayson Perry's Art Club on Channel 4.  It was a low-key encouragement to get people doing art.  It had various celebs on that you might not have associated with art.  The paintings were mediocre, but that is fine because it is trying to inspire.  The occasional genius artwork would have been nice, but possibly in the way of the aim of the program.  On the whole I watched it for Grayson Perry who I have a lot of time for, and I have no problem with the people sending in their scrawls.  However, what I found baffling was when the celebs were asked to show how they did their paintings.  Now, although I can appreciate someone's attempted artwork without calling them a genius, why would you want to know how a painting was done when you would never wish to recreate that painting?  A demonstration of a poor painting can only be taken as an example of what not to do.  Where does that put the celeb painter?  I can't imagine anything more embarrassing.  We are celebrating mediocrity.  We can do better.  We really can do better.

So here's my plea: don't mistake inability for style.  To get a really convincing painting that captures the feel for the original scene, a lot experience in how to bend perception is required.  To beat the camera, we do not aim for copies, but to go further and make something more convincing that talks to us at a deeper level.  You can't do that purely through destruction, whether that destruction is through inability or experimentation.  The best paintings that seem real, pull apart the scene in ways that are not obvious, that slip under the radar and do not stick in the eye.

A new painting.  Another fantasy one at that.  I have been doing far too many paintings from photographs lately.  Although it is always good practice to get reality right, there's a bunch of skills needed for the non-reality, and they need exercising.  This one though is meant to have a photographic feel, or it won't work.  Wish me luck, I'm going need it.

Here's a backlog piece.  I painted this recently: around January 2020, early enough for a comfortable completion of a piece for the exhibition theme of movement, but not so late that I realised that the Summer Exhibition was to be cancelled.

Well that's a big oops!  I've just realised that my recent posts, intended to be "Riverside Dwell" were actually titled "A Rivenside View" and the contained link was to the old work.  That might have been a bit confusing.  Sorry and all that.  I have now corrected those posts.

Having messed with your minds, you might be forgiven for thinking I would take extra care not to mess things around any further.  So renaming the picture from "Riverside Dwell" to "Mountain Village" would not really be on the cards.  Yeah, like.

Well I didn't rename all those previous posts, so count yourselves lucky.

Upshot: the painting is now finished.  Time for something else.

Was finished... now is.  Probably.

Just to point out our art club's annual summer exhibition:

Yes, virtual, as everything else is currently banned.  I've put a lot of effort into processing all those images, so I hope you enjoy them.  Also have a go at the virtual gallery.  I've just got the high resolution versions of the paintings in without grinding it to a halt.  This helps.  Now to get captions in.

Voting has been cancelled due to irregularities.

I have fixed the immersive VR.  It is now running on WebXR, so should be available to a variety of headsets.  If you do, please give some feedback as I have only tried it on the Oculus Quest. 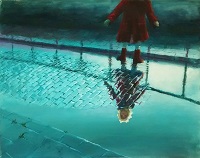