This is where I usually get to.  Last week I finished off the dancing-around-the-bonfire, and Tuesday evening is creeping up on me.  I haven't thought about what I am about to paint.  Every now and again I get a feeling for some grand scheme, but either it seems just too daunting, or more likely, the grand scheme has evaporated by the time I decide what the next painting will be.  I really need to keep a notebook of ideas going.  So, no ideas in the head whatsoever.

This is just what came to mind... and stuck long enough to convince me it has worth: a spiral stairway disappearing into the blue heavens.  Now, I always like spiral staircases (if you haven't been up the Scotch Monument then rectify this asap.) and a bit of ruined castle is going to set the scene suitably.  Now, having the stairway disappear into a vanishing point immediately shouts of strong perspective, so I decided to run with an excessive amount of perspective and have the castle walls wrap around to give a bit of a fish-eye effect.  I was uncertain about the sky: I wanted a strong blue, but I felt cloud was necessary to keep the perspective strong across the whole picture.  That's the plan.  Here goes. 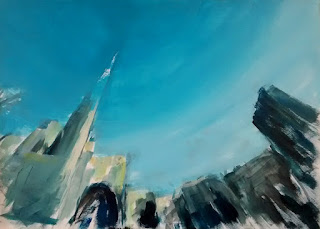 As this was done on a club night, this is acrylic on A2 acrylic paper (I like large paintings).  First, lots of bright blue with varying degrees of titanium white added.  For the darker areas I had to add a little bit of ultramarine.  Then I drew two lines in to define the staircase on the left.  I purposefully placed the vanishing point one-third from the left, as the rule goes.  Note however that the horizon is somewhere about the bottom of the view and effectively plays no part in the composition.  I then drew a few guide lines pointing directly at the main vanishing point to determine all the angles of the painting.  Lastly I rapidly blocked in vague building-like blobs just to pin down the light and shade.  The main aim here is to pin down the bulk colour, angles and tonal range.  Absolutely no detail.

Everybody seemed to like the blue.  However, I was running straight into a problem as the castle was not inspiring anything.  No worries: I've been there many a time... just keeping plugging away. 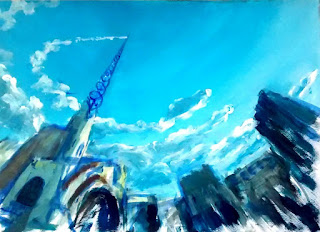 Having not been inspired by the castle, I hit the sky.  As previously advertised, I needed clouds, but I didn't want to overwhelm the sky with them (everybody liked the blue).  To emphasise the perspective I decided to arrange the clouds in rings.  What would the clouds do if someone really did build a spiral staircase miles high?  I don't know, but aeroplanes can leave trails so I thought a trail would be good as it binds the staircase into the cloud layer.  As I've placed the sun on the right-hand side, the light on the clouds changes across the painting so that clouds on the right look back-lit.  I drew up some lines on the buildings to progress them somewhat, but the result is a bit muted.  Part of that building-work was to mark out the spiral. 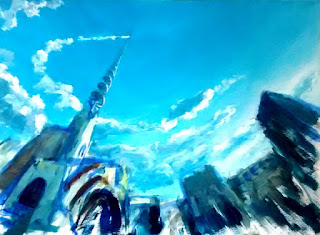 You can't see it in this image, but I spent some time working yellow in the clouds.  The real thing does look better for it.  I then went for the detail in the spiral staircase.  This goes against my general plan of leaving detail to last.  I really shouldn't have done this, but firstly I thought I could get away with it (as it is separate from the unworked castle), but mostly my concentration wasn't there at all that evening: I just wasn't up to getting my head around the castle. 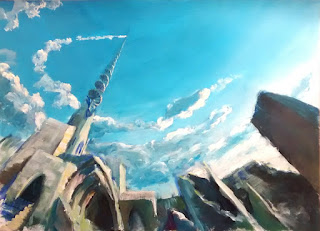 So this is the first evening I switched to painting at home (coronavirus and all that).  It was time to hit the castle.  Sometimes the only course of action is to get lots colours on your palette (yellow, titanium white, yellow ochre, a dark blue and a magenta) and then let rip.  It can sometimes have to go as far as taking my glasses off, but not so wild on this occasion.  This is partly why I don't add details like the stairway in at an early stage as it puts you off aggressively changing things.  However, the staircase did not stop me and this steers the painting back in a useful direction.  Moreover, slapping paint down fast and furious is much more fun. 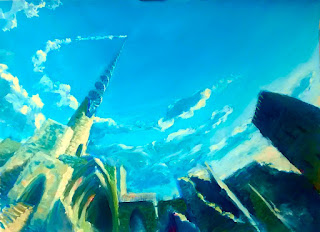 Now I can start on the detail.  I have a go at trying to tweak the photograph to make the colours true to the painting, but it's still not quite what the painting looks like.  I don't know if anyone else has the same trouble taking photographs, but something always messes it up. 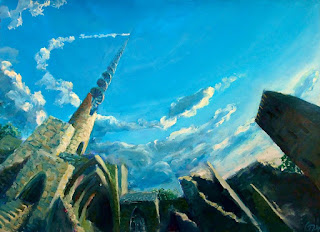 That wraps the project up.  I've taken a little more care over photographing and colour balance so that you can get a proper impression of the original.  Not too much to report - just a lot of small detail and fixed edges.  This is the first week I've resorted to riggers. I've put detail into the nearest brickwork - I drew the joints and then went back over the bricks to bed them in.  It's a curious painting, an interesting exercise, but not one of my favourites.