Here's another from the backlog.  This was completed in September 2019, and would have made this year's exhibition.  During Bunkfest 2018, there was a guy creating big bubbles for the kids to jump for and pop.  I thought this would be a great scene to paint and so took several photographs.  It has lots going on, life and painting it will force me to do some figures... which I have been remiss over.  A year later, and I feel brave enough.  I pick this photo from the bunch as it nicely combines movement, people and bubbles: 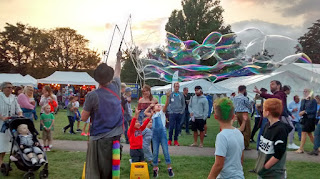 I decided to crop the image because it would otherwise been too cluttered with inconsequential detail.  I want to concentrate on the bubble-maker and jumping kids, as this tells most of the story.  That leaves out most of the bubbles, but once the nearby bubbles have been included, the rest do not really add anything.

This is an oil-on-canvas painting, so I start with several lines to pin down the main features.  I have used these lines to direct the motion in the kids at the front.  Alas I haven't captured this in a photo, but you can still see some of these in the next shot.  I am not looking to map out everything, just to fix the proportions.  Then I will block in, add detail and finally put in the subject matter itself - the bubbles - done last as a glaze. 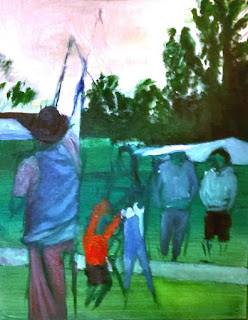 OK, that's quite a lot of blocking in, and I have already started on the bubble-maker's clothes.  However, largely this is just getting the main areas of colour right without any detail.  The trees are tree-ish, but slightly smaller than their true size.  Note that I have darkened the middle ground for effect - the middle ground is in fact as light as the foreground, but I wanted to emphasise the foreground.  I'm happy with the overall effect.  The yellow warning sign has mysteriously vanished, because I can. 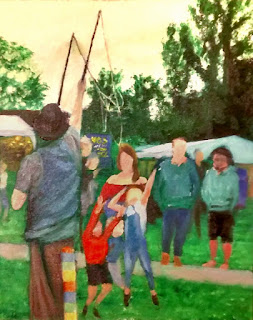 Yeah, sorry about the changing lighting on these photos.  The last photograph was taken with a bit more care, so use that as a reference.  This was mostly about pushing more detail, gradually across the painting, rather than working on one bit to exhaustion.  This is partly to let me bail out at any time.  Partly because I couldn't face having done a spectacularly brilliantly detailed section only to mess the next bit up.  I find that as soon as you put any detail in, I get too scared to make crucial changes. The bubble-maker has his tail now, although its colours look too washed out (that's not just a bad photo).  The accompanying woman (mother?) has been started.  A few more heads here and there.  A few more people added in the middle ground, very roughly.  No faces let.  It is worth pointing out that as I am not used to doing figures, a fair bit of pain is happening here.  I am expecting this to fail.  I intended it to be a learning process, and this is living up to it.  Lots of work on the middle ground, keeping that artificially darkened appearance.  That tree on the left gave me a ton of trouble.  It didn't look right until I went back over the spaces with sky colour.  A trick well learnt.  The grass was painted over with the usual trick of a flat brush loaded with multiple hues.

This is starting to come together, except for one important omission: the faces. 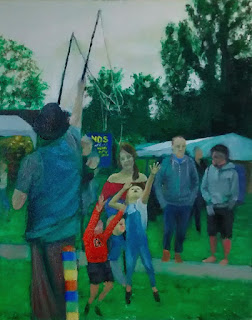 Lots of pain passed through there.  Not a single face went easily and you are looking at about three layers of paint on each.  Of particular trouble was the smallest kid in the middle who went through and remains in a state of alien descent.  There were a few edges sorted out and sharpened up.  Hands have appeared.  I went back over the bubble-makers tail.  At least that looks about right now. 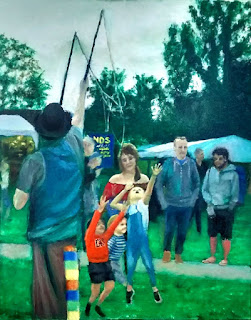 Now I am finally winning.  I went back over almost every face, and this time it is looking OK.  I finished off lots of minor details such as shoes and the small kid's shirt.  That leaves the bubbles. 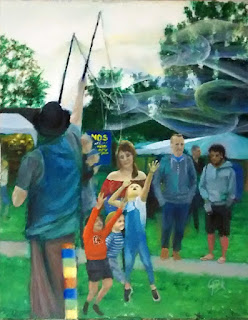 Done.  I left good week or two to make sure the paint was dry as I needed to use plenty of solvent and I wanted the glaze to be bright.  A lot of sweat over this one, but I did enjoy it.