This is another of those back-stories I mentioned.  However, this is a very recent one.  Before I kicked off with Ascension, I painted Prague Panorama, but I don't have a record for that one.  This is the painting before Prague Panorama.  There you go.

Summer Exhibition 2020, back when we thought it was going to happen, oh poor fools, we decided on a theme of movement.  Ironic now I come to think about it.  Our exhibition themes aren't compulsory: we just have a special section in the middle of the exhibition and persuade a friendly local professional to review them.  All very proper.  Last year it was reflections, thus Puddle Princess.  However, movement is a good challenge, and I could not think of better subject to show movement than fire and dancing.

Now, first the main problem: this has been done many a time and could come out very caricatured. My solution is to fill it with characters.  People are and will always remain individuals, whether that's in the way that they look or behave.  So I'm going to make each dancer look like an individual with their own strangenesses.

Next problem: representing motion.  First rule: keep it blurry.  We're not talking motion blur: I tried that once, it's awful.  When something is in motion, our mind's don't capture detail so well, so don't do detail.  To contrast this, and make a point of it, I decided to put a lot of detail in the surrounding foliage.  A bit back to front.  The rules are nothing if they are not to be broken.

This in acrylics as it's an ordinary art club evening job.  Nice and big A2 piece of paper.  I use my preferred approach of spreading a mass of colour everywhere as quickly as possible. 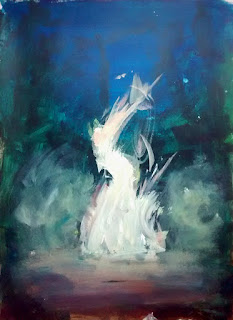 At this point I only have a few raised eyebrows: they are growing too used to these mass splodges and I can't surprise anyone any more.  Most people picked up on the fire.  The fire is intended to be in a woodland clearing thus I've left the outside dark where the trees are going to crowd in.  I have splodged in some dark patches in the top corners to give a feel for what the trees are going to do.  I'm just trying to get a feel for the painting.  This has a bit of atmosphere, so I'm happy.  No dancers yet because I want to concentrate on them separately.

So it's now dancer time.  The idea is to use flowing lines to pick movement and make the dancers united in their dance. 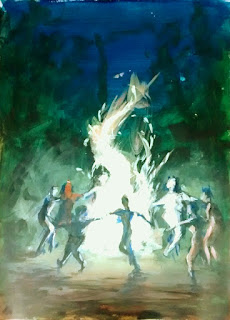 So I started out just drawing the wavy line that becomes their arms.  I then gradually pick out different people along that line as inspiration takes me, steadily adding to each character in turn so the whole ring develops as a piece.  By the end of the evening I have some interesting variations and plenty to play with.  Although I was looking forward to this bit, I was very nervous, and it came out ball-park.  At this point I'm getting several quizzical looks.  Good.

Now to work on the surrounding trees.  Although there is lots more work to do on the dancers, I don't like to leave parts of a painting behind for long.  Each part of a painting effects the other parts, and it can be a costly mistake to put detail in before you know the approximate result of all the rest. 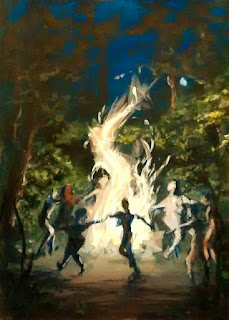 Lots of green.  I did try to vary the green hue depending on lighting, but that does not really come through.  However I do like the contrast between the green and the blue of the night sky - I intentionally left some of the dark outline of the foliage in to give that gloomy shroud effect. 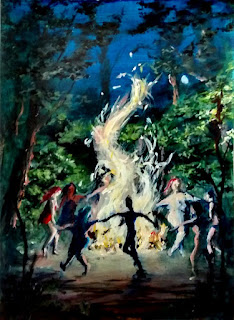 Now, finally, the usual last step: lots of details and a few corrections.  I also put in some silhouetted foreground saplings to improve the glade feel.  I worked the dancers as far as I dare - too much detail will make them static.  Similarly, extra detail for the fire, but using a small brush to give large strokes.  That's near enough what I wanted.