This was originally painted around June 2019, but it's definitely one of my favourites, and just missed out on the art club's exhibition 2019, and it looks like 2020 is not happening.  So here's it's shout.

Some time ago I painted "Moonstruck" in which I got very lucky and it worked brilliantly.  This was a winter painting and I followed up with a pretty decent "Spooky Spring".  So then came summer.  This was the result. 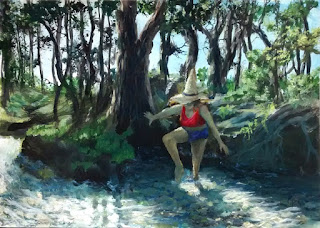 It was one of those paintings that struggled from the word go.  It has plus points, but it never worked right for me and was a long way off the original image.  Just to say my wife says she's very happy with it, but I'm not.

Time for a revisit.  First, the message.  What am I trying to say?  Yes, hot, yes the relief of cool water, but I also wanted a feeling of seclusion.  I wanted a private space where someone could be whatever they wanted.  This does not come across.  Why was the original not working for me?

The composition is dull.  It is looking straight on.  Yes the horizon is roughly at the one-third point (as the rules go), but that almost is a failing in itself.  This speaks of a holiday snap, and a holiday snap has someone holding a camera and other holiday goers politely keeping out of view on either side.  There is a lack of mystery.  Also the far field is distracting from the main subject of entering the water.

The water also fails.  I put a lot of effort into that water, trying different approaches, but nothing took.  It looks furry, not wet.  It is difficult to say what to do about that.  The angle of view is part of the problem as it captures a lot of reflection, and I want to see some of the stream bed.

That got me thinking that a change of view point would help.  Looking down a bit would help.  Where to put the horizon?  If I put the horizon at the top of the page then I could get rid of it completely.  That allows me to remove the far field which will help improve the feeling of seclusion.  I am also looking for any opportunity for a composition with an in-built border.  This makes it more self-contained and complete.  So having got rid of the horizon it occurred to me that if I faded the outside to black then the outside world would virtually disappear.  I also had the idea that I could work figurative motifs into the black border to provide a pagan element.

So that roughly was my starting point.  This is an art club evening painting so that's acrylic on A2 paper. 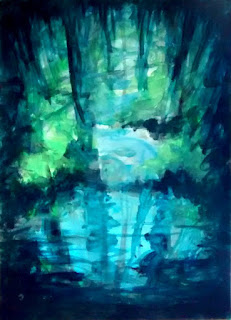 As a first evening, this was quite promising.  I decided to throw paint around to provide a bit energy, and capture the main structure of the painting and its tonal range.  This was a real glasses-off fast-paced swipe.  You might not quite catch on what it is meant to be, but I like this way of painting as it gives a good stand-back-and-stare effect.  Obviously I've put that black border in (with bits of blue and green worked into it).  If you look carefully you can see dark tree trunks to capture the perspective of looking downwards.  I've worked these into the border to show intent.  At about 60% the way down I've got a dark break where the water begins.  I marked the reflection of some of the trunks just to continue the perspective lines.  The result gives the right overall impression of what I want even if it does look like a right mess. 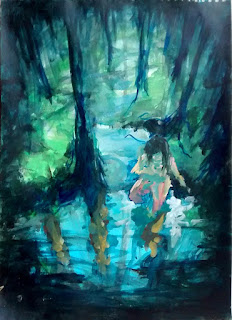 Two main aims of the next evening: kick off the main character and steadily firm up some of the design.  I am aiming to progressively improve the painting as a whole instead of working on individual details.  The plan with the main lady is little more than a placeholder at the moment.  I just want the stance, position and size.  Note that clothes are intended right from the start, but that's too much detail at this point.  I have started putting some stream-bed colour into the water where the dark trunks in reflection make the bed visible.  I am not sure at this point where this is going, but I am hoping to keep nudging it until it works. 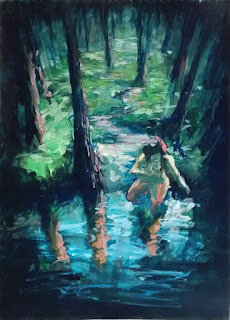 More firming up.  There is supposed to be a windy path through the middle, so I've tried to bring it forward.  I have left the ground at the top unfinished and greyer to provide better depth.  Towards the front I am emphasising banks around the path and around the stream. The trees are firmed up and a bark-effect put in.  I'm not going to be too detailed as this painting want to flow rather than be static.  The outline of the lady has been improved.  I think it was about this time that I abandoned any idea of including the hat of the original as it would obscure too much with this viewpoint.  I could not work out what to do with the water though. 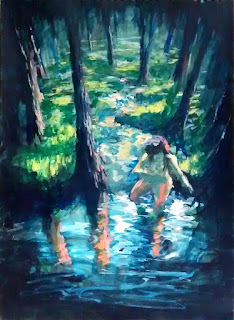 Now I've had fun working light details into the tree trunks, the path and the grassy banks - they were looking too dull.  This brings it alive much better.  I have also tried working some light into the water, but the water is not working.  If the water does not work then that's the end of the painting. 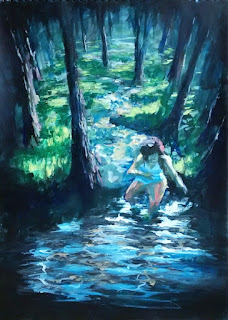 Apart from starting to develop the clothes, I spent a whole evening attacking the water.  I went wild with a load of paints trying to get the wet feeling that was eluding me.  The evening went badly.  On review I decided it looked better before.  As the rest of the painting was doing so well, I was reticent to abandon it.  This is one of those moments where having a week between art sessions is a positive advantage. 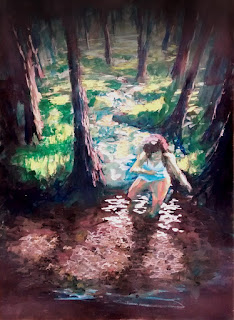 Things got desperate.  I painted the whole lot out and decided to use layering.  I usually avoid layering as you can't see the final effect as you go and this can result in an imbalanced final result.  However, reflections on water are an obvious application for it, and I needed to do something.  So first: the stream bed and forget about the reflections.  I'm not going to paint each individual stone and pebble - that would be tedious in the extreme and put a level of detail that would conflict with the rest of the painting.  I have done a texture to give the impression of detail without much effort.  A texture works better here as smooth block colours would look strangely flat for a light-dancing stream bed.  Note the shadows of the nearby objects have been put in, flowing away from the sun position.  I was pleased with the result, but apprehensive of the next layer. 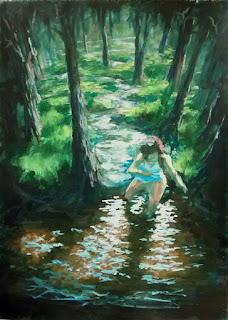 A whole evening was spent on that next layer.  I initially place a thin mixture of light-blue and titanium white to place ripples, mainly from the lady herself, but more subtly from the banks around.  These were placed quickly in an attempt to prevent excessive detail.  I then went back over with a thicker mixture to bring forward the right details.  This is now working.  The bed glows through the reflections in all the right places and those reflections now look wet. 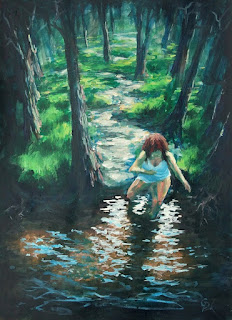 Now for the last evening, which was a load of corrections and refinements.  A bit of work to the hair and the shoulder, with better detail on the arms and hands.  I kept the face rough as this would alter the focus otherwise, and I want the focus on the motion into the water.  I added some wayward branches at the edge of the water and evened up the border a bit.  There was a big mistake in the trunk reflections which I altered so that the trunks properly converge on to a vanishing point.  Finally some detail into the foreground foliage.

With all the battle with the water, I abandoned the idea of pagan motifs in the black border.  I considered putting them in now, but sometimes enough is enough.  The painting was plenty busy as it was.  They would only detract, and may even make it too creepy.