Another Tuesday evening and a new painting.  You would have thought by now I'd have prepared for it.  You know: sat down and dreamt up something really dramatic. I got as far as: let's have another creature in a domestic scene.  I had glimpses of an elf in the cupboard under the stairs trying to rescue a pot plant.  Tempting.  So I sat there in Centre 70 for about an hour trying different ideas in my head, with the most dramatic bit being where I rotated the paper from landscape to portrait.  I drifted off topic a bit and finally decided to have another go at a street scene.  This time I shall make it rainy with cobbles. 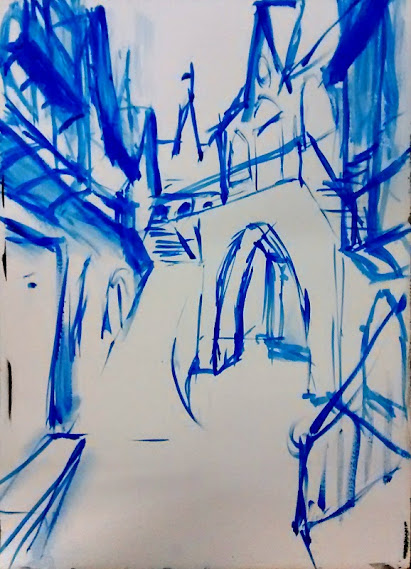 Not a bad start.  Although this is acrylic (on A2), I shunned my usual wild splurge for a constructed scene.  The central focus in my mind was the curved staircase on the left leading up to the bridge.  I added buildings as I felt the scene needed it.  Then plan is to gradually add shadows until the depth appears and then overlay some colourful bits like awnings.  The overall effect though will be grey with reflected light and yellow light pouring out of the windows.  There will also be people with umbrellas and kids.

You would have thought that a thoughtful, intelligent choice of where the light is going to play and the shadows fall is required here.  I have tried this in the past - it never works.  I end up concentrating on detail resulting in an uncomfortable, patchy scrubby result that does not hang together.  Instead this will be done by eye.  I will keep the result in intend in my mind and add paint where it feels right.  I can then use all that logic to evaluate the result.