The premise of this painting is simple enough: a fantasy creature of some kind has made a home at the bottom of a small waterfall.

The initial plan, on sitting down and wondering what the next painting will be (again, at the the last minute), was to do another fantasy picture.  Okay, yes, my last completed one was "Mountain village" but although that village doesn't exist, it is not quite fantasy.  My first thoughts were: another dragon picture.  This may have been influenced by a new duvet cover which is a superb stream-punk version of a dragon.  After a few ideas were mulled over, I got distracted and switched to a goblin-like figure.  When it comes to goblins/elves/faeries there are a limited number of cliches to delve:
So naturally I'm doing something else.  I like taking the unusual and contrasting it with the ordinary.  However, I'm not going down the Harry Potter route, but letting my creature belong in its own space, where we might stumble over it if we were but quiet enough and a bit patient.  So, I'm thinking of a comfy hole in the woods, a nice splashing stream, nobody around... except for my goblin-like figure.  I wanted the figure in the stream, but it took me a little while to work out what he would be doing there.  It turns out that he's filling a kettle.  Ha, I have my plan.

How to approach this?  In contrast to my last painting, I want a naturalistic treatment.  The image I have in my head could be photographic in presentation, as if I've copied faithfully from a lucky snap.  That is not to say this is meant to be photo-realistic.  I am not going to get the details true to real life.  I want the overall impression to be that of a photograph.  That way, the main fantasy figure should merge with the reality to make it mistakable with a wildlife documentary.  That's easy to say, but tricky to do.  This one should stretch me a bit. 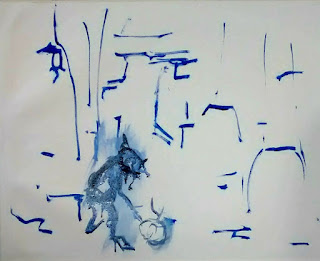 Oil on canvas as I tend to do nowadays.  So I start out with a few positional marks, just to arrange the space a bit.  I then put in the creature in outline.  This is not meant to be realistic, so when my wife makes a comment about it being a bit 'Blue Peter', i.e. something that a child might have done, that doesn't get to me.  That's her problem, not mine.

Here's the painting plan: drops blobs of paint where they seem to want to go until the basic shape of the painting takes form.  This is what I did with A Mountain Stream and I enjoyed painting that. 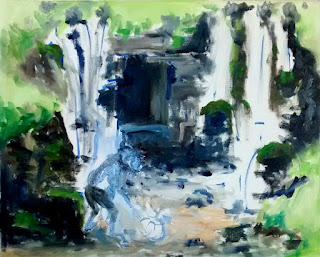 It's not perfect, but it is a promising start.  It that almost-got-depth feel that I need it to have.  However, it is speaking of painting rather than photograph, so next I have to develop it to fit the image in my head.  Only once that feels right can I start developing some of the detail.  Note that I am not even attempting the goblin figure let: it is the hardest part of the painting and it needs to blend in with the environment.  So I'm getting the environment right first so that I do not need repaint the figure.

At the moment I am not getting that photo-feel.  Not quite.  Those greens around the edges are problematic: I am missing the outer context.  Maybe I should crowd-in the left and right in a bit?  The high contrast is nice, but overdone?  My initial image has faded a bit. 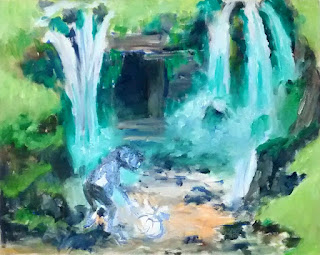 For the sake of something to do, I started on the waterfalls.  Yes, on the whole you avoid light colours with oils until last.  However, I can't really see the composition properly with an essential piece missing.  I've painted the water in with a minimum amount of paint, just to give an impression.  The detail will wait until later.  I have also lightened some the rocks and reworked the messy left hand side.  Overall the contrast has dropped considerably, possibly too far!  I need to take more care over the shadows and my light source (on the left).  So next I need to put in shadows on the left to regain some of that contrast.  I really need to do this before detail sucks me in and prevents big changes.  On the plus side, I redid the stones that make up the entrance to the home.  I made these a cross between steps and random slabs.  I say on the plus side because they by a fluke capture the feel that I want for the whole.  So if I make everything else fit in with those steps, this might yet work. 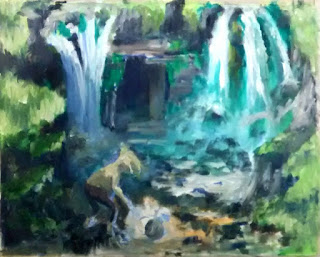 A step in the right direction.  As advertised, lots more shadowing on the left hand side.  A bit of depth appearing as a result.  I have also put tree shadows in to give it more of a location.  All very rough still: I am trying to develop the overall impression.  As this is approaching its rough resting place, I've started on the creature.  He's meant to be half in shade, half in light.  Again, just rough splodges to capture the basics.

I think I am more or less done on the rough cut.  It hasn't quite hit the original image, but it is good enough to finish off.  The detail should bring this painting alive.  The weakest point is the stream bed, so that my next target.  After the excessive hassle I had with Midsummer Paddle, I will tackle this in the same way: paint the stream bed first then layer the reflections on top. 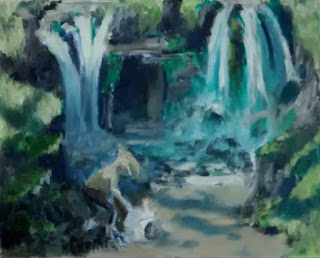 Having said that the next thing is the stream bed, I start thinking about the blues.  I've used ultramarine in places, in particular the shadows, especially in the waterfall.  I think of ultramarine as colourful black.  It is a dead colour which darkens almost as well as black itself.  It is useful if you do not know what colour your shadows are.  However, it can make your painting a bit toy town, which is not going to work if you want the colours to be true, which is the case here.  So I've gone over key areas using cobalt blue.

I then ripped out the stream bed.  I left a little of the light reflection at the top to act as a guide. 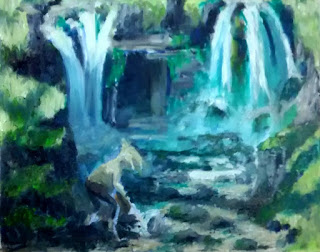 Stones were then rebuilt bit by bit, working backwards and forwards.

At this point I'm not liking this painting.  This is normal at this stage, but it is fussy.  I've done too many fussy paintings.  I promise that the next painting will have a much simpler composition.  In particular: the bank on the left is too bitty; it is lacking focus; the top of the waterfall has never worked and it all feels too overworked. 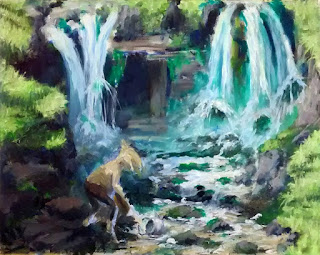 Lots more detail in now.  I mostly worked on the stream putting in the reflections.  It is not as clean-looking as Midsummer Paddle, but this is meant to be turbulent flow.  I've redone the grass with the usual combination of horizontal flat-brush stripes followed by vertical highlights.  Some highlights done in the waterfall.  The troublesome bank on the left has been reworked.  I decided some flat boulders would look more appropriate and give better depth.  I am much happier with that bank now.  Overall, I am much happier with the way its going, but that doesn't stop me from thinking about something very different next time.

You know what: I haven't done any tree roots yet.  Tree roots are compulsory. 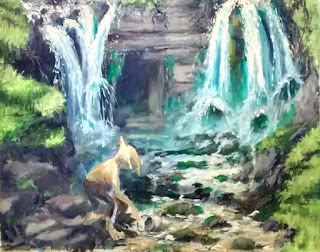 Okay, not that many tree roots.  I am tweaking now.  Notice the highlights on the stones in the bottom left?  This was done to match the threshold of the cave.  Some detail on the creature, but still stuff to do here.  Lots of definition now on the rocks at the back, and some more to come.  Some highlights on the water.  I'm still not happy with the grass so I might alter that again.  However, it is now getting close.  I think one more session should do it. 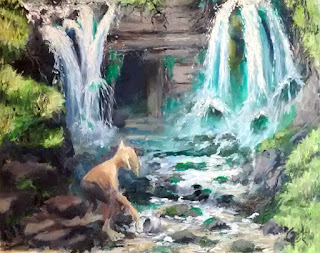 More tweaks and I'm done.  A bit of firming up on the creature.  A few highlights in the grass to break it up a bit.  There's bits and pieces that could have some work done, but that's just too much fiddling.

AS a result it's ball-park where I wanted it.  I like the stream , it's pretty lively and has depth.  The waterfalls are a little disappointing.  The grass I had lots of trouble over and is OK, but not brilliant.  The rocky back drop worked well.  After all the anguish, the bank on the left came out well.  The overall feel is about right, but was always a tall ask.  The creature itself is not too bad and looks like part of the scenery.  It's all far too overworked, and this is primarily because of the choice of composition.